Not quite the STAR WARS Force but a more realistic grounded force that can blast upto 350km/hour on straights, called the Force India. Somewhere in our little brain, a part recalls the time when a team named Force India entered Formula 1 and how we took pride in seeing our very own team having a Paddock, all thanks to Vijay Mallya. Agreed that the team is based out of UK, but the fact that they operated under an Indian license and that 42.5% of its shares were acquired by the Sahara group makes it pretty darn Indian. And once the gold, the tungsten and the white liveried cars were launched at the Gateway of India in Mumbai, we all took it to our hearts. It was business time and the team flew to Barcelona for the pre-season testing, ahead of their maiden campaign in 2008. Equipped with Ferrari engines, and with Giancarlo Fisichella and Adrian Sutil at the wheel, no one knew what the car was capable of. The primary aim of the team was to complete the race without technical glitches. However, the team experienced its fair share of failures at the start. During the Australian Grand Prix (the first race of the 2008 season), the team realised that they had a long way to go before they could make a mark when both the cars retired after a few laps. Force India revised its target accordingly as the season progressed. They knew they had a Herculean task ahead and it being their first season ever, there was a lot left to be captured. Fisichella achieved his best finish (10th) at the Spanish Grand Prix, missing out narrowly on the team’s first points. Team owner Mallya realised that the continued change in ownership and insufficient investment had led to the team’s disastrous launch. Force India shifted its focus onto the next season, believing that new regulations would yield better results. The VJM02 chassis was powered by Mercedes-Benz engines in 2009 season as part of the five-year deal signed last season. The deal also included a supply of McLaren-Mercedes gearboxes, hydraulic systems with KERS (Kinetic Energy Recovery system) feature. The VJM02 was the first Force India car to pick up points, hold pole position and record the fastest lap at the 2009 Belgian Grand Prix. Although Ferrari’s Kimi Räikkönen went on to win the race, Fisichella finished a close second. The team ended the season at the ninth position, ahead of Scuderia Torro Rosso with 13 points. 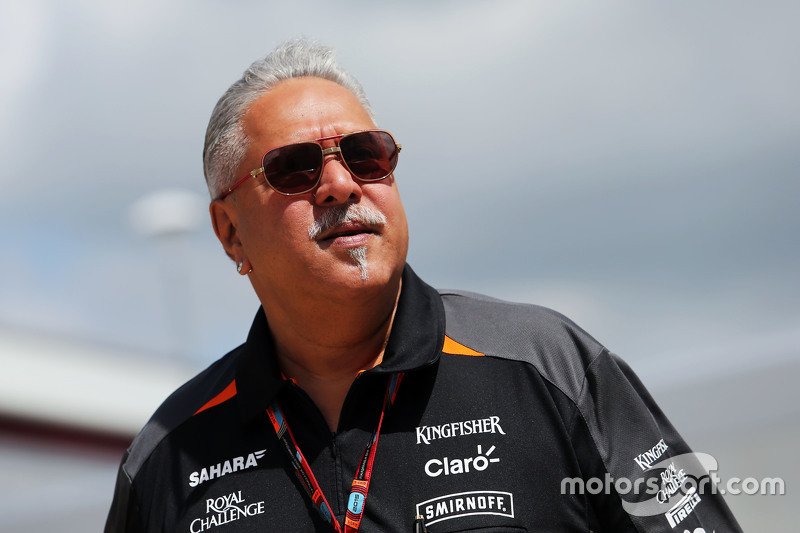 However, this did not reflect the vast improvement that Force India had made since the beginning of the 2009 season. Even after a few high profile departures from the team, it battled to finish 7th in 2010 and bettered their previous best in 2011 when it finished 6th, just four points behind the mighty Renault and ahead of the likes of Torro Rosso and Sauber. The next two seasons saw a frequent change in drivers and the team repeated their performance, similar to the two preceding seasons. The team’s mediocre performance remained consistent and they kept striving for a podium finish.

In 2014, a new driver lineup featuring Nico Hulkenburg, often referred as the German Hulk and Mexican Sergio Perez aka Checo. Finally, the podium wait was over! At the Bahrain Grand Prix, Pérez put Force India on the podium with a third-place finish. The 2014 season was a massive hit for the team as both the drivers started amassing points regularly eventually earning a whooping 155 points which was some 120 points over the next placed Torro Rosso. This laid credibility to Force India showing that it no longer low-Tier. After a successful 2014 season, everyone had high hopes for the team in the next season. But little did we know what lay ahead at the start. Force India missed the first pre-season test in Jerez, due to an unexplained setback in the development of the Force India VJM08. It was later revealed that Force India was facing financial issues. However, Force India’s 2015 car finally broke cover when Hülkenberg hit the track on day two of the third and final test at Barcelona. The car was an updated version of last year’s challenger and was immediately reliable. They had a good start to the season with Hülkenberg finishing in a strong seventh place in the Australian Grand Prix. The car was a significant step forward from its predecessor, particularly in high speed corners. Both the drivers managed to deliver strong performances at Bahrain, Monaco, Austria, Belgium, Italy, Singapore and Mexico city. Perez put up a podium show in Russia. This upturn in form helped Force India achieve their best placing at 5th with 136 points in the Constructor’s Championship, although scoring 19 fewer points than the season that preceded. This was a remarkable achievement considering the team’s financial plight and their delayed preparations for the season.

Now with 11 races already into the current season, Perez has two podium finishes at Monaco and newly added Baku Street circuit. After a slow start to the season, Force India has gathered pace and has started to deliver strong results. Going into the German Grand Prix at Hockenheim this weekend, they will be hoping to carry on the momentum. The team aims to be the fourth best this season (it is  to be noted that the first three teams are Mercedes, Ferrari and Redbull). However, knocking off the team currently ranked fourth, Williams, will be the team’s biggest achievement as Williams has been around for decades.

But there isn’t a doubt about Force India’s ability to soar high, given that the FORCE is with them.